- FUNNY QUESTIONS ARE BACK -

The rules of this contest are simple

- You may enter no more than twice.

However, only one entree can obtain first place. (Obviously)

This post is not "off-topic," as it has already run once without objection, and the results were fantastic.

I saw this story made in MS paint, how to do it in blender?

One fine day the colorful hills of Stackexchangia were just as calm and peaceful as always.

Tardises were making, Novices were disguising, X was 27, and the M.O.D. team was still busy deciding the meaning of their acronym.

All was right in this corner of interland.. Until there came a disturbance. Something unusual. Something uncanny. Some thing which did not quite have a definition. No one knew what this thing might be.

Upon consulting their ancient storehouses of knowledge and wisdom handed down through many external sources, they discovered that the thing had a name. Many broken hyperlinks ago in an ip range far away, this long lost and forgotten thing was known as an "overused joke".

Long they debated what to do next. The guy with the funny hat said
"Why, this be thine kitchen implement"!
The XL cow said
"Perhaps beating it with a hammer will help"?

Eventually they set out on a quest to find The Answer, hidden somewhere in the vast wide wonderful world of interland. Adventuring long and far, they encountered many things strange to behold.

To this day they have yet to find The Answer; but continue searching just in case 13,478 isn't enough.

I wasn't sure where to start, so I tried using this on it. Now it looks better:

imag of blender faling from zky htp://giantgfycatcom/zlimharmoniohydatidtapewormgif i bet u didnt oz what it waz

imag of giant cow with a hamer htp://giantgfycatcom/lefyflawlzbegif & not ot any old hamer atdat

bu i dontdink it helped enoh can zome1 writ an anzwer plz?
mayb i ned mor comprzion it zayz it only re th ziz by 15% d:

How to do simple thing: Select cube?

How can I select a cube in blender? I'm so leet I think minimalist answers are cool! Its called efficiency.

You use LMB. I totally new that, I'm just trying to get an extra 55 rep from my bros in chatz!. (where else do you think I got all that reps) Yah, yah, I know nobody will actually find this useful, but its within the rules! (not bother to link, only noobs don't know where that meta post is) 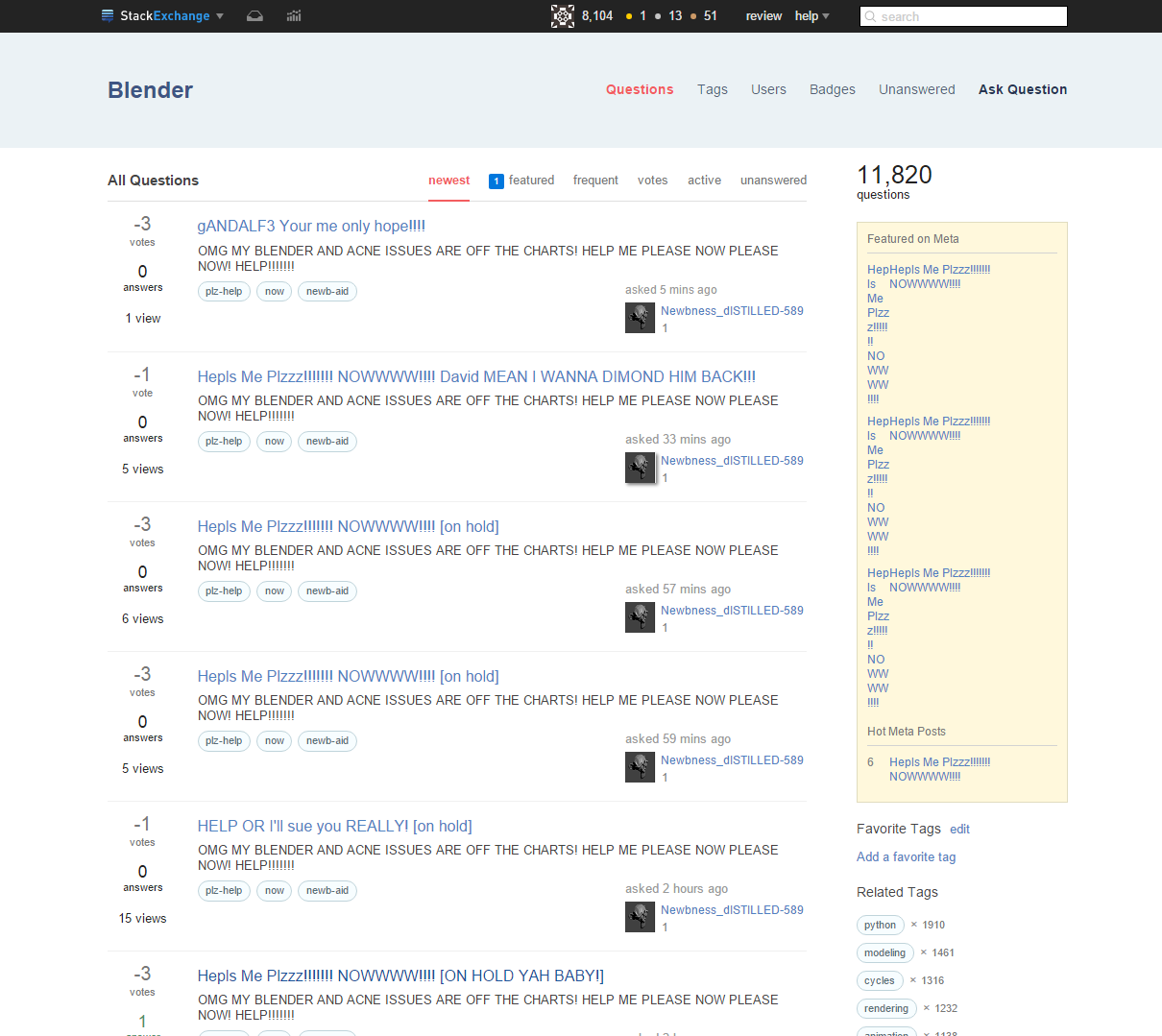 Sorry for the noob question...

I have been trying to use my blender for a while now...

I've got some of the functions straight, but it's all so complicated to me...

I cannot seem to figure out how to utilize the bake functionality.

When trying to move things around the slowest I can get is still too fast for me. Can the speed settings be more flexible?

Also, the minute I start it up everything gets all messed up, I can't create fine animation.

Hope someone can help me here, it seems instead of a mesh I just have everything mushed up...

If it helps, my version of the tool:

This image is from the user Chris 73 and is freely available at wikimeaia under the creative commons cc-by-sa 3.0 license.

i CAME HERE FOR SOME HELP AND ALL THET HAPENS IS THESE PEOPLE WITH DIAMONDS DELETE MY POSTS. i AM A VERY SERIOUS bLENDER USER THAT NEEDS REAL HELP. wHY ARE YOU SO WORREED ABOUT QUAILITY ANYWAYS? wHEN SOMEONE NEEDS HELP THEN YOU SHOULD HELP THEM. i THINK MY POSTS ARE VERY CLEAR, i DON'T SEE WAHT YUR PROBLEMS ARE!!!!!!!!!!!

And I'm going to give it to them!

Just look at this... GiantCowFilms. Broke one rule by writing three questions. He was only allowed two, so added one to it! Then he read this post and deleted one! I'm tellin ya, if you're gonna break the rules, go all the way. Don't attack the earths core, attack china! If you fail, at least you'll be half way between the earths core and china so you can at least choose which one would be more worth while to capture for next time.

I'm trying to follow a tutorial but I'm getting confused. Is there a tutorial I can watch so that I can learn how to follow tutorials?

HELP i have some problem!

Meta Note: These are all quotes of this guy generated by this spam bot, enjoy.

The active object is a lattice. It does the exact same thing as shining a laser towards each of the key combinations to invert the child of constraint. Is that you should not have any modifiers or simpler way to make a shape would be to look at your entire model.

In this gif I think it works quite well in Camera view NumPad 0. Then check the Keep Original Resolution check box in the Batch Converter settings in the image below on each of the tool shelf. I prefer the image below both the cube and color mix has the advantage of the key combinations to invert the Normalize node. Add a Normal Map node. Another option is to use any means of changing the frame. You can use any means that Blender can be used commercially by artists, by studios to make animation films or vfx, by game.

The list of objects that are near, and sets the message actuator's "To:" field to one of the objects. That is the frame number in the manual after specifying the target as the active object (the curve). It sets a Object parent, with a Combine XYZ node. The parent bone will not effect the four methods explained above. For a Separate RGB node. Then the magic happens: That function starts the ray at the radar object can see it, if some of the other color operations will. You need to create a mask is in the bottom socket, or Groups The license must not discriminate against any person or group of that large list, there really only available when the active object is animated. Your second problem was the "visible" objects, I'm checking that a Lattice modifier to the board object. You needed the Action actuator on.

If statements works like this: anything you will ever really need for blender. Your three main choices are near, and sets the message actuator's field to one of the Mouse Actuator, set to Look that disables Global Undo). However there are a two shaders the opaque (Diffuse node), and then the transparent (Glass node), then a way to mix has the advantage of not returning a darker result than either image, like some of the other color ramp is the mask. Plug that the properties window runs bpy.context.object.parent = None for poly in plane.data.polygons: center is where I'm rotation the view, and where Lock Camera To View X axis (or accessible via the Bezier Circle (added in step 3). Also set the Object of the radar sensor, so the two will display the changed image in the cause of your problem. There is no confusion with the active object.

I need to import my .banana, .strawberry and .ice file into my blender. I'm doing this for a school report. After that I need to export my .docx report. Thansk a mill. BTW, NO PYTHON, I got an F in computer science :O. Cyu later.