I know it's technically correct to close this question, for example.

Rephrasing of off-topic questions is unlikely to bring them within BSE's remit, so the standard explanatory message is not quite appropriate.

If I was a brand-new user who had gone to the trouble of creating an account, and then had my question clobbered, however justifiably, without a suggestion of alternative sites to visit, I would feel I had been treated brusquely, and probably never visit BSE again.

I see this has been raised before.. posts such as this.. Is there any action we, as ordinary users, can take to provide more helpful canned off-topic messages, pointing to authoritative alternative sites?

I think this is another case of multiple users picking different close reasons.

When this happens a "generic" close message is used rather than one of the more specific ones, since non matches all users choices. 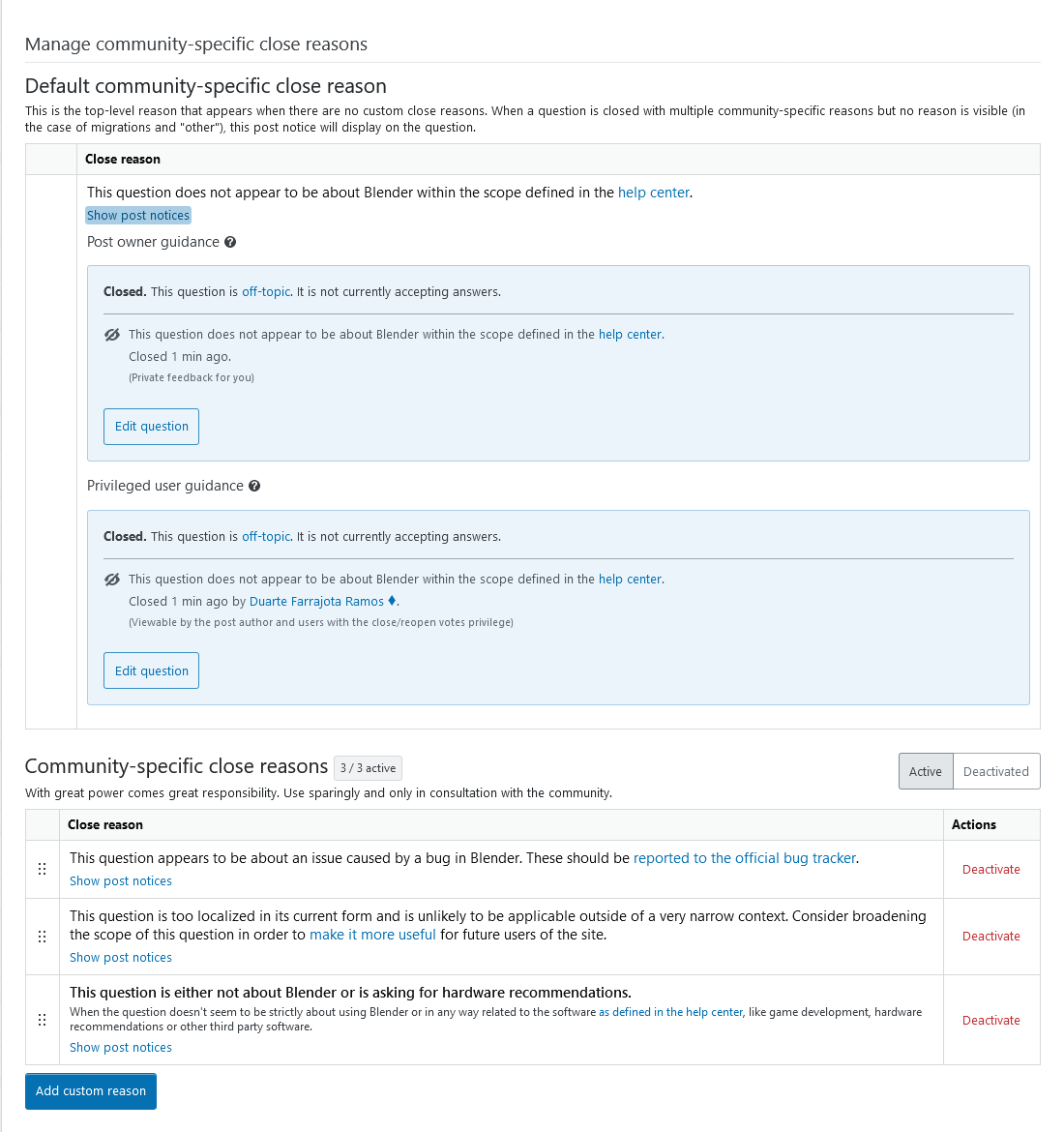 In this case I chose to close as off topic because it is not strictly about using Blender. Should all other users have chosen the same, the user would be shown this message, which I think is descriptive and points them in the right direction.

This question was put on hold since it doesn't seem to be strictly about using Blender as defined in the help center. - For general questions about Python https://stackoverflow.com - For game development you can use https://gamedev.stackexchange.com - For hardware recommendations https://hardwarerecs.stackexchange.com If you can rephrase it, [edit] the question to make it on topic by focusing on the Blender specific part of the problem.

In this situation, I don't think there is a better solution other manual intervention.

When voting to close it is not always immediately obvious what reason other users have chosen, and as such what message will be displayed afterwards, unless a user navigates back to the post after closing. The generic message the user sees also doesn't seem to be editable by the community.

A mod would have to manually reopen and close again with the "correct" reason to enforce the desired message, or manually post it as a comment below. But this seem "dictatorial" if not all users agree.

As a non moderator in this case one could optionally post it below as a comment as well.

If you see a situation where a canned comment doesn't seem appropriate for a particular question, either insufficient explanation or just wildly wrong, you can leave a personalized comment. I see that I can leave a comment on the linked question. This is probably related to points earned, which are necessary to even see deleted questions, but you have more than I do anyways.

My understanding is that questioners will see comments on deleted questions, but if I'm wrong, hopefully someone will correct me. If they can't, that's not good design.

I try to leave comments when I vote to close a question, because canned responses seem rude to me. We are humans, not robots, and other humans deserve our personalized explanations, no matter how abstracted they seem on the internet. However, I don't always. Sometimes I recognize that this isn't a time when I can be diplomatic enough; other times, I'm simply lazy. But I think it's the decent thing to do, and I make some effort toward it.

I am not a fan of BSE putting words into my mouth. I'm happy to attach my identity to an initial close vote, but not to the words, "Does this answer your question?" I would much rather BSE offered those words and allowed me to say something else, provided I still gave the appropriate link. I would still sometimes just let BSE say that on my behalf, whether out of recognition of my own bad mood, or out of laziness.