Life On The Surface

If I ask myself the question, If BSE was a mini series what would it look like? SE sites are somewhat a pyramid scheme, would we set it ancient Egypt, who would play Duarte?

IMHO one of the best tv series is HBO's Deadwood, initially written to be in ancient Rome, it found its way to the "Wild West" since HBO had recently screened "Rome". It has marshals and sheriffs, deputies, gunslingers, whores, .. I'm leaning towards some steampunkish western setting. 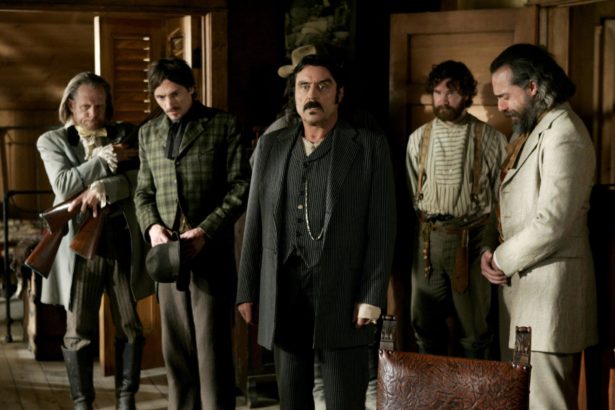 The Gods of our show, who without there would be no BSE.

In no particular order, a little chicken and egg

Gods from both often "walk among us". Keep in mind for any church or religious characters in the show.

The site is split into a number of territories. As a noob to our first SE Universe we are given one sheckle and the opportunity to stake our claim with a new question in up to 5 territories or answer any unprotected question.

The monetary system here is very simple. As soon as you have 15 sheckles you can hand out sheckles (upvote) without limit. If a claim (question) is a mine, think of a sheckle like any of the dirt you dig out. The "better" the mine, the more gets thrown in. Even so, high sheckle mines are soon deep below the surface. Many believe the SE gods have made perhaps one of the worst search engines ever to keep us on the surface. The HNQ Circus tours the surface, for claims to rain down sheckles upon.

The first Noobs to set foot on BSE and stake their claims. Like all pioneers most are now long gone.

As the site "matures" the Noob Hordes become larger and larger. This is where a lot of the show plays out. Due to a number of Noob rights violations the SE Gods drew up some protections [CoC]

Voted in, for life, to control in particular the Noob Horde.

Sheriffs and their Deputies

The Good the Bad and the Ugly

Like the Chinese in ancient times, or more recently the US, do we build a wall at the border of our territory. Can it resist the horde? Remember the Alamo?

Things you see and hear at the border.

Your take on what role you would play, the other characters (by type please not by name) , possible scenarios... or maybe you would set the show completely differently.

Not long ago the Monica wars took a heavy toll across all Stack Exchangia, affecting most areas of the universe. Many marshals died, some resigned due to post traumatic stress, others went into hyper-sleep for prolonged periods, awakening occasionally when the need is most dire.

This left us with the current generation of marshals, rookies in the eyes of the old veterans, inexperienced in many ways. They weren't here in the old days when the land of Blender Stack Exchange was created, they didn't help create the world or shape it into what it is today.

They try their best to keep the planet running and the rules respected non the less, with what little knowledge was passed down from the old ones, to shape the future into something better.

Many impending dangers loom in the distance threatening the land.

The threat of the donut wielders

They come at night and strike silently in the dark, stealing precious energy from our users with incessant questioning at the minor of inconveniences. They don't care for the common well being, and bring no value to the game, relying on others for answers giving little sheckles back. They get most of their nourishment from stray whores and sheckle-farmers trying to make a living from whatever they can scrap.

We do have some strong allies that defend the land at all costs.

BatFinger is the master of the old order of mages wielding the ancient power of coding. They are skilled in the art of scripting with the old language of the Serpent.

This not only grants them the prime access to contact the dev Gods by speaking the language of the divinity, it allows them to make quick work of hordes of noobs and even uber-noobs with bare coding skills.

With two fortresses in the lands of both Python and Scripting they control the borders and tirelessly defend the land using the power of Python scripting.

There are many other allies and vigilantes who on a daily basis tirelessly help manage the growing backlog of flag reports that reach the marshal stations.

We have gained and lost many other friends along the way, like Ray Mairlot the Gate Keeper. He was adamant in keeping the territory borders clear and well defined, tirelessly tagging questions, and keeping tabs on a highly organized and coherent system of tags for keeping noob trespassers in check.

Some marshals and users like to cross universes from time to time to Seasoned Advice realm, a land of vices, gluttony, excess, for an occasional respite from the demanding work of keeping the land of Susane the monkey safe.