A meta dissertation on Conduct with new users

I came across this post yesterday and it bothered me enough to bring this to meta. 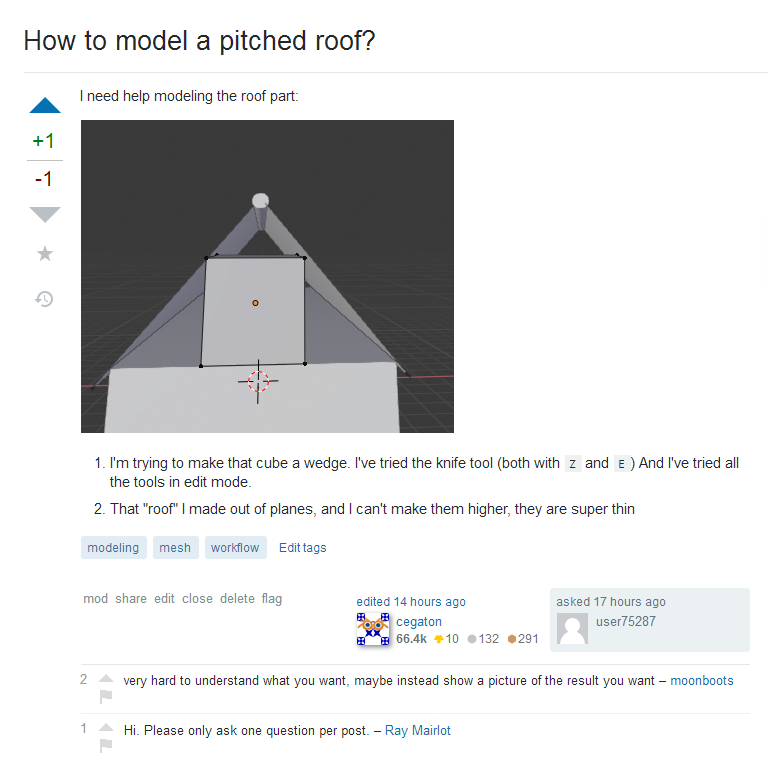 First take a look at how the question looked originally. Granted it was a lousy question. There were many problems with it: useless title, unclear, and multiple questions.

moonboots pointed out that is was unclear, and suggested more pictures.

Ray Mairlot pointed out that we only want one question per post.

Then it got DVed (not too surprising).

When the actions taken on this post are listed out and looked at it seams perfectly normal, but yet this user deleted his or her account just hours after creating it and posting their first question (and they will likely never see the answer).
Why did this happen? How can we do better?

When I read that question I saw a brand new blender user who knew nearly nothing. They did not need their question answered, they needed to know enough to know why they should not even need to do that. I perceived that even though they had a numbered list, there two questions really could be answered together.
Further at this level of beginnerness, how can we expect clear questions. It always is going to take some amount to decipher what the beginner really wants to do (XY problem).

Yes we need to keeps the site standards up. Yes we need clear questions. Yes there should only be one question per post. However, from the outcome of this question, what played out obviously was not quite the right approach.

Think back to when you were just starting out with blender, you probably felt overwhelmed, and daunted. (You might of gotten a mini dose of that when you opened up 2.8 for the first time.) At that stage none of us want "stupid elitist rules" pushed, WE JUST WANT AN ANSWER. That is the disconnect. It is between (some) new users and the curators of BSE.

I feel that some of us (myself included) have fallen into a warden roll. We know how this site works, and efficiently act on anything that falls outside of the target.

a person responsible for the supervision of a particular place or thing or for ensuring that regulations associated with it are obeyed.

We need to step away from that mindset and become more of an usher.

I really like the second definition of usher "the start of something new." When we help a new user we are starting his or her journey with blender. However when a new user gets frustrated and quits, we might be ending their journey.

In the example question if you know the answer, answer the question (even knowing the problems with the post). But also leave those comments saying that you should only have one question per post. Or editing to give it a better title.

A new user like this is new to blender and BSE. Answering the question teaches them blender, comments and interaction teaches them BSE. Ideally the two should not be exclusive, nor should one be more important then the other.

Saying all that I'm not at all suggesting that we abandon all our "rules" just because someone has a stupid shiny "New Contributor" indicator under their name. We expect new users to learn the ways of BSE the same as we had to learn the ways of the road to get a license.

Ever hover over that new contributor indicator? It says something like:

UserX is a new contributor to this site. Take care in asking for clarification, commenting, and answering.

OK so answering should be no different, but asking for clarification and commenting. There in lies some wisdom.

Give them (new users) a tad bit of grace. Help them along, be a usher not a warden.

Just to clarify I am not finding fault with the actions of any of the users named here. Some of the answers seem to interpret this post as if I had an issue with Ray Mairlot's comment. That is simply not the case. Terseness does not equate with unfriendliness. This post was written because I really do not know what to do. There were no problems with the interactions between that new user. Yet that user "rage quit". That is the crux of my question. What can we do? What should we do?

< sarcasm>
You must be new to this site. While answering your own questions is perfectly valid and totally encouraged, please do so using the answer section.
< /sarcasm>

Nice post, joking aside I feel you have already self-answered this quite well in your own question.

At some point I started following a tip someone casually gave (I can't remember who but probably one of the mods or at least one of the veteran users here) which is Don't immediately downvote newcomer questions unless it is something egregious, rude, or spam.

It applies more generally to being more welcoming to new users. More often than not it looks aggressive and unhelpful, and at worse it just scares new users away and discourages improvement leading to abandoned questions.

As to the why, I guess we fall on the usual culprit: Frequent users just get tired of seeing the same mistakes and (understandable) beginner behavior, leading to frustration and more "aggressive" responses.

I don't really have a solution for that, I frequently struggle with it myself. The only half-measure I managed to develop is to not address those posts if I sense I'm in a bad mood, otherwise I'll probably lash out, downvote, post moody comments, or behave in a less conducive way.

I'll just wait it out, and "work in the shadows", by editing the question, linking to possible dupes, or pointing to the offended rules.

If behavior persists or the question isn't improved in a timely fashion, then "the system" will take care of it, or just fall through the cracks into oblivion.

What you are asking for is a double edged sword. You are basically asking to babysit new users, which takes more energy from the curators of the site. Not every curator has that or is willing to do that long-term. This might drive curators off the site (which is happening). You might get more new users reach their solution, but also drive other users off the site. The goal is to have database of well written questions relatable to everyone, it is not helpdesk service.

The beauty of how SE works is it regulates itself, there is no need to govern the user-base how to behave, because everything is voluntary and community driven. There will be curators more nice than others, some will do the ushering, some will warden. You get a Gauss distribution and the site will behave where the majority lies. Artificially changing their nature will make curators uncomfortable.

Asking RayMairlot to silence himself and not point out there are problems with the question is as problematic as asking the user himself to formulate a better question.

My policy is usually to be silent if I don't have much nice to add and I downvote the worst of the cases only. But is this really the correct action? There aren't enough ushers on this site to babysit these questions and if ignored these become dead weight to the site. Mostly unsolved, uncurated. Restrain in fear of the fragile user quitting just makes the site more polluted.

Solution: If the problem is you thought you could have answered that question, but the majority voted it was bad, was closed and the user quit and won't fix it, you can add that question to the site yourself. You can take the idea, improve it, make it applicable to larger audience and post that question and answer it. For the site it's not important which user adds it. By thinking about how you would word it so it's more useful to all users and if there isn't already question fulfilling the same task you might find out the question was rightfully closed or redirected to a dupe.

Generally if the feedback is polite and constructive, I have no problem of it being voiced. If there are snowflake users that will rather quit than have their problem solved and won't help the helpers with the question reciprocally, their problem is probably not that important to them. They need to be guided and nurtured to fit the site, and the reality is there are not enough good samaritans to do that. I believe these are mostly kids and when they grow up they will see past the negative experience they once had, will realize they will have different experience now and will return to the site prepared to fit much better, treating it less as a helpdesk entitled to getting solution for free.

I agree with everything you just said however, I would add that we should probably answer the question with an ending like "also, could you please ask only one question" etc. I know from personal experience that people on BSE can be unduly harsh. BSE is here for a reason-to help people with blender! And we don't want to act rudely if we want to be heard or payed attention to. We can't expect everyone to be as far along in blender as us.

Not the answer you're looking for? Browse other questions tagged discussion new-users .

6
New Users and Answers that should be comments
8
Should we downvote first posts?
5
Should information on how to use <kbd> be taught to new users?
8
New off topic close reason
5
what to do with Yes or No questions
11
Professional Way vs. Getting the image?
2
Should [raytracing] be removed?