Why are some names light blue in code markdown syntax highlighting?

What is the light blue syntax highlighting? 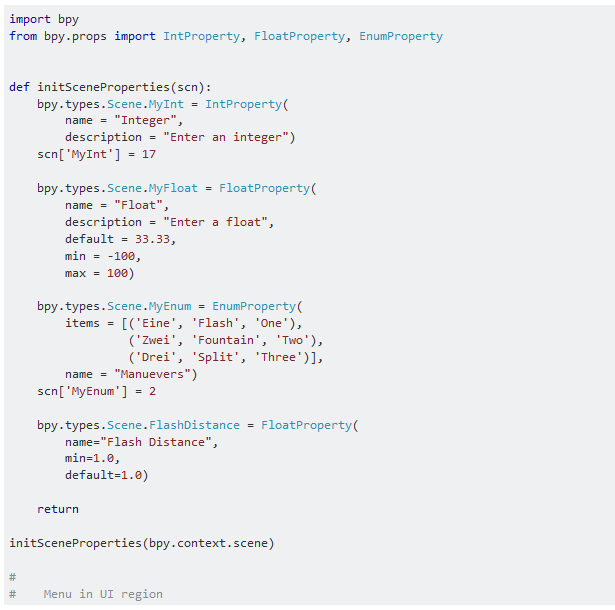 And as a supplementary, why isn't the same syntax highlighting used on meta?

For Blender/Python development we have chosen to follow python suggested style guide to avoid mixing styles amongst our own scripts and make it easier to use python scripts from other projects.

Using our style guide for your own scripts makes it easier if you eventually want to contribute them to blender.

A brief listing of pep8 criteria.

The syntax highlighter is using the style, and expects a camel-case name (CamelCase), for instance, MyInt to be a class. Suggest naming it my_int or myint instead.

StackExchange syntax highlighting is handled by Google Code Prettify. Looking at the source code, it appears that Code Prettify has a general set of rules that it enables/disables for languages with C-like syntax, making slight tweaks for individual languages. Python's configuration function is as follows:

This tells us that there is no special consideration given for CamelCase, or snake_case, etc. in prettifying Python. So, Code Prettify is not specifically following PEP8 criterion, but rather a more general naming convention. This convention of CamelCase for class names is found in many C style guides, which I would assume Code Prettify is based off of.

Not the answer you're looking for? Browse other questions tagged discussion python markdown .

16
Add contests on blender exchange
2
Place to store frequently used markdown
7
The anatomy of Questions without accepted Answers
5
My question "The Blender add-on Render:POVray has a warning that 'this script is RC/... what does this mean?" was closed as off topic... Why?
8
Downvote Flagging
1
Contacting Moderators
8
Why are people downvoting my question?
4
BSE python: to pep or not to pep. Standards vs Readability