What is the best time (day, hour) to ask a question?

Sometimes when I ask questions I don't get a lot of views and they go unanswered before, eventually, nobody ever sees them again. What's the best day of the week and time of the day to ask questions to get the most attention?

I'll try to give a slightly different answer.

Looking at the Most Active Users page I am going to roughly guess that based on the percentage of people that decide to reveal their country of origin, very roughly about 30 to 40% of users are from Europe or neighboring regions.

Lets assume for the sake of this answer that they are a majority, and the most active users, are also the most 'knowledgeable' and more prone to answer a question.

If one assumes they visit BSE at regular European waking hours, and only check the Newest questions queue, and not the Active (I am guilty of this sin, and I am ashamed of it) then one could roughly estimate that a question posted at the "rush hour" or when more "experienced users" are present would have a slightly higher chance of being spotted right away, and thus an ever so slightly higher chance of being picked for answering.

Now this is a lot of 'ifs' and 'buts' and far fetched speculations. I am also being slightly dismissive of people from other regions of the world (no offence meant ;), for which I apologize.

Could this translate to a real measurable accurate time frame? It just could not, there are so many variables and different people, with different habits and variables in their life that it would be impossible to say for sure.

Over my time here I seem to have noticed a slight pattern and possibly spike in activity roughly during late afternoon/early evening between 18 to 20h GMT, maybe corresponding to that free time at the end of the day people find to play around with Blender a bit after a day of work or before diner time(?).

Some times also during weekends especially those late bitter Sunday afternoons, during that depressing pre-Monday time, when the dread of the incoming work week sets in, and you realize it is already too late to accomplish anything useful with your wasted weekend, so you just resign and try to make the most of what is left of it.

Maybe posting then would be more beneficial to post, I don't know... Sorry for the rambling post

Interesting question. Fortunately it is not that hard to pull such data:

You get a .CSV file with all the answers since the beginning of time and their timestamps.

From this data visualized in GoogleDocs we can see that the most answers are posted in Wednesday , with weekends seeing less traffic: 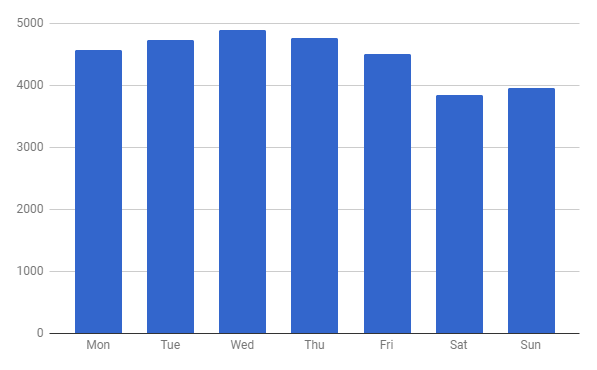 Sorting this further based on time (data.stackexchange returns UTC times): 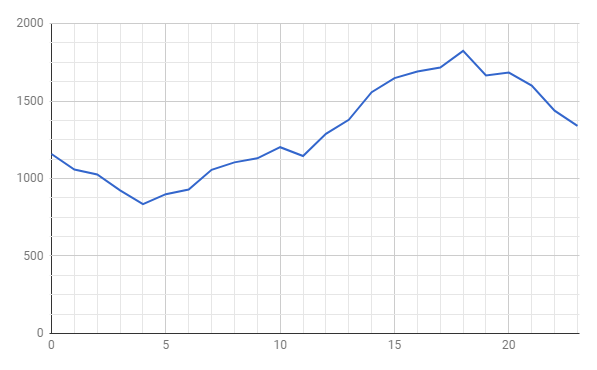 For maximum correctness the timestamps were rounded, so for example if an answer was posted after 8:30 and before 9:30, it is counted as posted around 9 o'clock.

It is clear most answers are posted at 6 pm, least at 4 am. Since both answer and question take some time to be written, I would say the best time by statistics to start writing your question is at 5pm UTC.

To generalize some rule of thumb, most answers are written on weekdays after Europeans had eaten lunch (12:00 UTC) :)

Given that this site is used by people all over the world living in different time-zones, it is impossible to predict who is going to see your post and at what time. On top of that it is also impossible to predict if anyone knows how to answer, or has the time and will to do it. If your question is not getting enough attention follow the advice on this link: What should I do if no one answers my question?.

19
How do I ask a question that is hard to describe?

5
Are negative answers acceptable?
15
Is there a way to encourage voting?
1
Unanswered and abandoned questions
0
Is it possible to get notifications about comments?
10
Blender 2.8 is going Beta. What now?