People posting their answers on comments

I've noticed, specially the high rep users, are putting down answers in the comments that might not be very complete. What is the point of that? Either fully answer the question in the answer box or ask the user for more information to make it answerable. Is this a possibly abuse because they want to keep their precious rep points?

I've noticed, specially the high rep users, are putting down answers in the comments that might not be very complete.

I think you just answered your own question there a bit. Remember, the point of this site is to help people, doesn't matter how you go about it.

What is the point of that?

I do this all the time and my main motive is that I'm usually busy and don't have the time to construct a proper answer (one with fancy gifs, links to wiki or even screenshots, maybe I'm at work or I'm tired or I'm not 100% sure of what I'm suggesting etc) or just can't be bothered really. I can come back to it later if I want to... or not.

At the end of the day, it's your time you're volunteering, you're not obligated to answer or acknowledge every post you see.

Either fully answer the question in the answer box or ask the user for more information to make it answerable.

A helpful or useful comment is more valuable than nothing at all.

Straying a bit from the topic at hand, higher rep users are more trusted so reputation has little if anything to do with this. I can't speak for everyone but reputation quickly becomes trivial once you've amassed enough to become a trusted user. If anything I'd say it's more to protect the user from blindly following some haphazard or bad workflow. John Doe has 30 million points so he must be correct, right? In the cases I've seen comments are more used for suggesting workarounds as opposed to being an actual solution.

No, I would instead go with https://blender.meta.stackexchange.com/a/437/12 that says...

I would try to notify the user first to give them the opportunity to answer the post and get the reputation. If they don't respond in a few days then answer it.

If you can't wait and you see the potential of the comment, by all means answer the question! Again, we are all here to help in some way and if you can confidently pen a proper answer based on a comment, go for it!

Let's face it: most questions are very poorly worded. Very few users can explain the issues clearly and concisely. For confusing questions, or in the cases where there are multiple causes for what people are asking, making comments suggesting possible solution is the only way to find out what the problem actually is. If the OP responds to the comment, then it makes sense to spend more time developing an answer (or finding a duplicate post).

No offense, but that is laughable. NO.

As you pointed out, it is high rep users doing it more. I, speaking for my self as a high rep user, do not care about the precious rep points. So I can assure you we are not writing a so-so answer as a comment to protect our selves from DVs.
There have been many times I answered in a comment, just because I did not feel like writing a whole answer.

As iKlsR pointed out, this is a Q&A site. In this context, at the end of the day does it make a difference if the user gets his answer from a comment or a real answer?

As cegaton stated, a lot of question are very low quality - as in "I have no idea what you are really asking, but here try this."
If I had to guess I would say that this is what you are looking at when you say there are "answers in the comments that might not be very complete."
Well if I'm not sure what the question is, then no I'm probably not going to take the time to write a full answer, when the OP will just come back and say "thanks, but no that is not it what I mean is..." (has happened to me before, and that kind of thing does not lend its self to be repeated.)

In my mind, there are two main reasons to "answer" in the comments.

Now as to whether or not you should flag them. Lets examine the comment flag reasons. 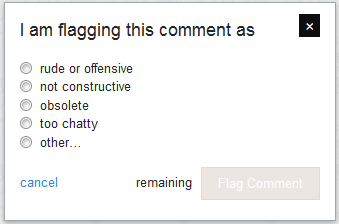 rude or offensive
Flag any comment that is something a normal and reasonable person would not post.

not constructive
If it adds nothing to the post flag as this.

obsolete
Common example on BSE is a comment asking for the blend, where the post has been edited to include the blend.

too chatty
often used on comments like "Thanks" or one of Iklsr's memes.

other
any time there is some problem that a mod needs to act on. Examples include a whole string of comments that should be deleted, or maybe an argument between users.

There is no comment flag reason that states "This is a guess answer. I feel it should be a real answer so it can get DVed."

Thus no, there is no reason to flag an "answer" in the comment. Either it helps get to the answer, or it will prod the OP to make it clearer.

5
Should we migrate questions from GD?
3
2015 Experimental Moderator Election Q&A - Questionnaire
17
Is it appropriate to promote your question by repeatedly posting links to it in comments of other answers?
0
kbd shortcuts and unwillingness to comply
2
Allow questions that are potentially bugs in Blender
15
When should we be asking question askers for blend files?